A step-by-step guide to 3D printing: A blog explaining the process in more detail simply for your readers.|Tech-bloging.com. 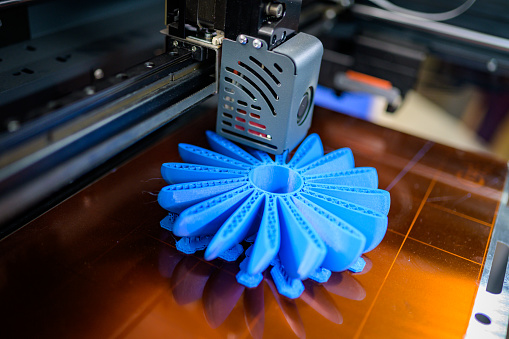 With a 3D printer, you can make almost anything.

You might be wondering if you can 3D print a 3D printer after hearing about this concept.
Understanding how 3D printers function will help you better grasp what they are capable of producing and whether you should get one for your house.
There are four primary forms of 3D printing, but we’ll concentrate on the cheapest.
The technique of taking a thermoplastic material and pushing it through a heated nozzle is known as fused filament fabrication, or “FFF,” It’s also known as fused deposition modeling, or “FDM,”
There are several machines with various designs, however all FFF machines have a few characteristics.
The X, Y, and Z axes of each FFF 3D printer allow it to function in three dimensions.
When compared to a home office printer, which simply travels along the Y-

he paper moves in the X-

this is a significant difference.
A hotend, or a device that warms room temperature plastic to a hot and constant temperature, is found in every FFF machine.
After heating the plastic, a little motor pushes it through the extruder nozzle, transforming the chosen material into usable form.
To put it another way, consider strapping a hot glue gun to a robot.
Filament is the term used to describe the plastic and other composite materials used in these 3D printers.
They are usually sold in spools that cost between $15 and $25 [US dollars].
As the extruder travels around the X and Y axes, the filament is pushed through at a constant pace.
This enables the 3D printer to layer-
by-

e your selected design.
3D printing is classified as an additive manufacturing method because it starts with nothing and adds material until the desired component is created.
A CNC router, on the other hand, is a subtractive production tool.
You start with a block of material and subtract or remove the sections you don’t want.
So, how do 3D printers figure out how to make your model?
You’ll need to give it a set of instructions, like with other computer-

Fortunately, it’s a lot less difficult than you may expect.
There are two major procedures that you may use to start your design. 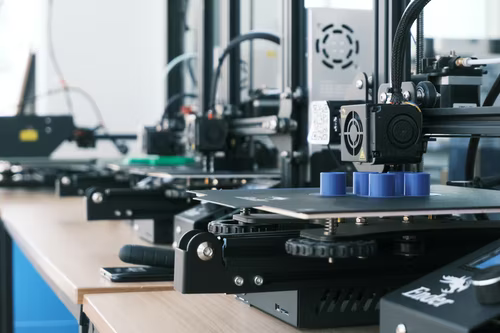 To begin, use 3D modeling tools such as Fusion 360 or Blender to create your own 3D model from scratch.

Another option is to get 3D models from one of several sources.
Free and paid models are available on sites like Thangs, Thingiverse, and Cults3D.
This contains both useful 3D printing and more fun and entertaining items.
After you’ve chosen or produced your design, you’ll want to open it in one of the several “slicers.” software applications available.
3MF, STL, and OBJ mesh files are accepted by most slicing software.
Your 3D model will be translated into lines of code that represent very tiny layers using slicing tools.
These layers are only.1 or.2 mm thick on average.
This is similar to slicing a vegetable into very thin pieces.
The ease with which this procedure may be completed may surprise you.
The program will write lines of G-

“instructions” for each layer behind the scenes.
The instructions will inform the extruder to move to a new place on the X and Y axis for each layer.
This is akin to plotting points on a coordinate plane in fifth grade arithmetic.
In the instructions, each point is stated in a strategic sequence.
In the majority of cases, in the most efficient sequence.
As the material is pushed out of the nozzle, the extruder of a 3D printer will continue to advance to every subsequent position, much like frosting on a cake.
This continues until each layer is done and the form is established.
The contour of your object is then filled in with more material in a process known as infill.
The infill will range from 5% to 100% and will provide the essential structure to the finished item.
In the recent decade, the cost of consumer-
level 3D printers has plummeted.
Entry-

ers are now available for less than $500, with solid beginning
printers available for as little as $100 or $200 [US dollars].
A tiny fan is included in every FFF 3D printer to assist cool the filament after it exits the extruder.
The fan aids in the solidification of the plastic into the appropriate form while maintaining adhesion to the preceding layer.
When a layer is finished, the extruder travels along the Z-

axis in the third

dimension.
This movement is quite modest, and it corresponds to our layer height in the “slicing” program, which was set to 1 or 2 mm thick. 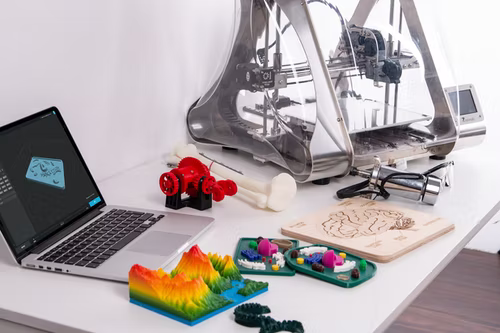 This method is repeated for each layer until you get the required component.

Extra material is manufactured for complicated pieces to temporarily retain or support overhangs and protrusions.
FFF 3D printers may also be thought of as a stack of 2D prints placed on top of each other.
The time it takes to complete a 3D print might range from twenty minutes to many hours or days.
The size and intricacy of your design will determine this.
The material you choose, the kind of 3D printer you use, and the slicing software settings you use all have a difference in how long it takes.
To summarize, begin by designing anything yourself or getting a 3D model from the internet.
Put it into your free Slicing program and it will produce G-

our 3D printer will read as “instructions”
Your 3D printer will next lay down plastic or other composite materials, layer by layer, as it interprets the instructions.
As the extruder goes from point to point, the plastic will continue to push through at a constant rate.
This procedure will be repeated for each successive layer until your desired component is created, which might take anything from a few minutes to many days.
Is it feasible to 3D print a 3D printer, to return to the original question?
Yes, your 3D printer can generate babies by copying extra components to build another 3D printer, at least in principle.
Most 3D printers, on the other hand, involve steel rods, belts, and motors, which are difficult to imitate with simply plastic.
You could, however, 3D print a big number of parts for another 3D printer.
Your 3D printer family will quickly expand with the addition of certain extra parts.
19.075983772.8776559