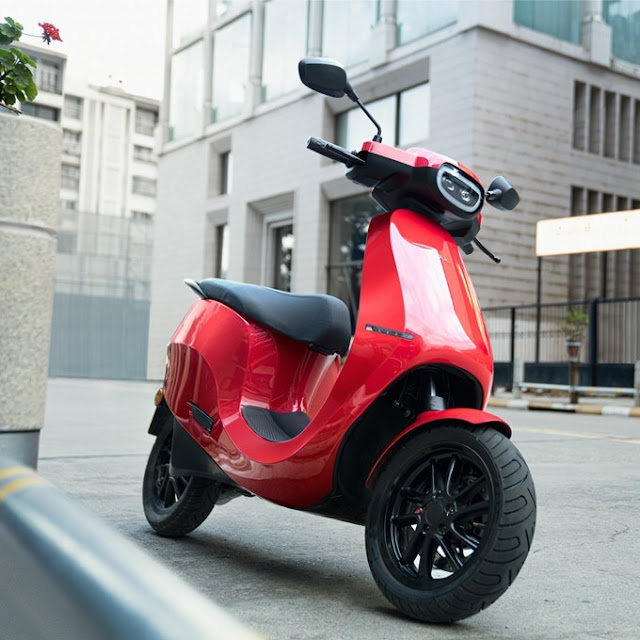 If I said 'ola' to you, you'd respond 'olla' back if you were Spanish, but if you were in India, you'd talk about the cab booking service, right?
That company, however, is now branching out into electric scooters, as evidenced by the fact that reservations for their first electric scooter are now open, and that is the topic of conversation today.
Welcome to Tech-blogging.com.
If you haven't already, please subscribe and turn on the be
ll notification symbol so that India's greatest automotive information can reach you immediately.
So,Ola decided
to get into the electric vehicle space, and they started doing a lot of work, and along the way, they acquired a Dutch company called Etergo, which makes a very popular scooter called the AppScooter, and the idea of the scooter is actually very interesting, because some of the solutions they found, which took common design choices, are very, very interesting indeed, and we expect that a lot of people will be interested in it.
Let's start with the most intriguing aspect for me, which is the frame.
Most scooters are built on a metal frame, which is what we call the underbone style, where you have a metal rod or a set of rods that go down the apron, under the floorboard, and rise up to create the subframe on which the seat and everything else is mounted, but the AppScooter chose to use a monocoque instead.
Monocoques are a common way to build scooters; scooters like the Vespas and its variants, such as the Chetak, have all utilized them, except that these scooters used a metal monocoque, whereas the Etergo employs a composite monocoque, which makes it significantly lighter.
So, the App
Scooter's net weight is only 74 kilos, which I was surprised to learn.
You should also realize that the lighter a scooter is, the greater range
and performance it may get from the same battery pack and motor.
They also made unusual suspension choices, because the front suspension has a swingarm on one side of the wheel, making it a single
-
sided front, and a shock absorber positioned on top of that swing arm that conceals under the apron, and the fender is tacked on to that unit. 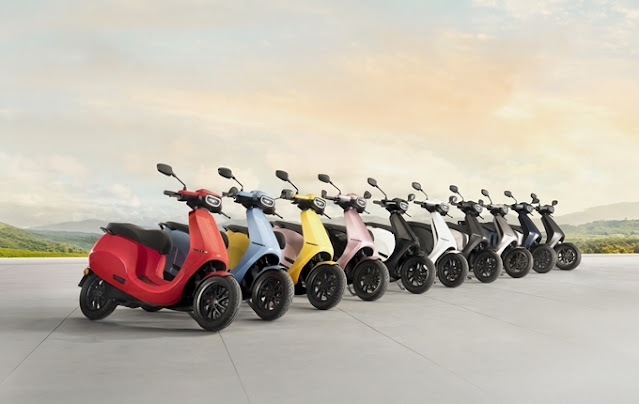 There's a swing arm at the back, the motor is mounted to the swing arm, and there's a belt that drives the wheel, but on top of it all, there's a horizontally mounted shock that's actually quite small in size, but all of the people who got to ride the AppScooter said that the scooter felt pretty normal.
There were automobiles with true human faces in the sense that you would always interpret the car as smiling at you, and Etergo went for a design that looked like that, and that's the design that's coming to India.
So when you look at the AppScooter, or whatever Ola names it in India, it will appear to smile at you, and that is part of the design, that's what humanizes the design, and it's why it looks so appealing.
The rest of the body panels, on the other hand, are extremely sleek and futuristic without being too sharp or too soft, which means that this design should appeal to a wide range of people, and that's one of the things we liked about the scooter, even though we've only seen Ola's videos and not seen the actual scooter.
Let's speak about the powertrain, because that's where the magic happens.
The AppScooter team did something remarkable because they had the original model with interchangeable batteries.
So they invented the banana battery, which looks like a large C and slides into the scooter from under the seat, allowing you to pull them out and charge them at home.
Now, this isn't always a good answer; for example, when Revolt did the same thing, their battery weighed 13 to 19 kilos, I forget the precise amount, but pulling it out of the scooter and hauling it upstairs was a pain
, it was something I didn't imagine anyone would be enthusiastic about doing.
However, the AppScooter team divided their battery pack into three parts, each of which could be purchased separately.
So you could buy the scooter with only one battery pack and an 80-kilometer range, and when you realized that your life with the scooter required you to travel longer distances, you could simply walk in and purchase a second or third battery, extending the range to 160 or 240 kilometers, respectively.
The good news is that spy images of the Ola electric scooter revealed an 80% charged battery with 127 kilometers of range remaining.
So the long
-
range option is finally coming to market, despite the fact that I believe 80 kilometers is a bit restricted, despite the fact that that is what everyone appears to be going toward in the market.
So, if the Ola electric scooter can have a range of 120, 150, or 200 kilometers, I believe it will be a huge step forward.
In terms of purchasing, I believe that allowing you to purchase additional batteries and then reinstall them in your scooter is a terrific idea.
I might not be willing to spend a lot of money, so I might spend 95,000 rupees on an Ola electric scooter with only one battery, but a few years later, I might realize that it's a good idea to put a second one in, and then the investment isn't as big, and it would be a good thing to do.
The size and shape of the battery were also important in the swappable model because they expected people to carry it on their shoulders, carry it upstairs to their houses, and charge these batteries, which is obviously not going to happen anymore because battery swapping isn't coming to India anytime soon until Hero and Gogoro get their act together, and the Ola AppScooter isn't going to happen until Hero and Gogoro get their act together, and the Ola AppScooter isn't
Let's speak about charging and motors now.

To put things in perspective, the Ather requires a 500
watt charger, but the AppScooter uses a 600
watt charger, and Etergo claims that if you use a fast charger, you can charge three back-to-back in 2.5 hours and get to 80 percent in 1.5 hours.
I don't see why Ola would change that, therefore I'm expecting a 600
watt charger.
And while that isn't a particularly strong charger in comparison to what you could find in your home as appliances, it does mean that the scooter will charge faster; the specific charge durations, of course, will be revealed once the scooter is released.
But that also means the scooter has a good range; each battery has an 80 kilometer range, and if we collect all three battery packs, the scooter would have a range of 240 kilometers.
Before we go any further, keep in mind that the Chetak and iQube, for example, do not have a fast charging option, whereas I expect Ather and Ola to both have fast charging choices, giving them an advantage.
The AppScooter had a 6
kilowatt motor, which is a really good amount since the Chetak has around 4 kilowatts, the iQube has 4.4 kilowatts, and the Ather produces 5.5 kilowatts with a peak of 6 kilowatts.
So, if the Ola scooter has a 6 kilowatt motor, it will be faster than all of these scooters right away.
If they have the battery packs on their side, Ola is promising you a scooter that goes faster and lasts longer, and that's a very, very interesting proposition, especially with the company, with the might of Ola behind it, entering the space with such seriousness, where they've actually gone and invested in what they call the world's largest elec
scooter factory.
That leads us to the most important aspect of the AppScooter, which is the connectivity choices, as stated in the name. 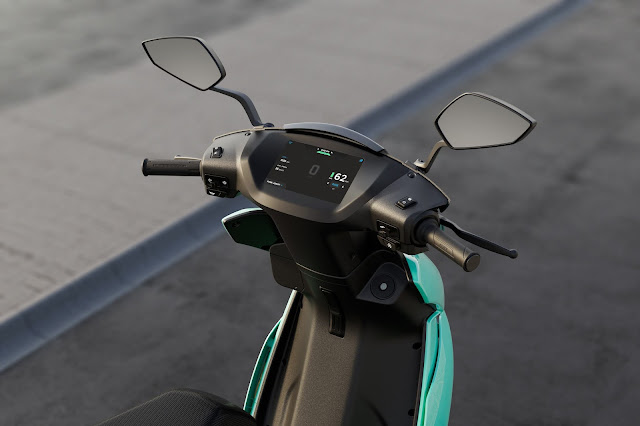 Isn't it true that the Ather features a touchscreen and a great menu system, as well as an app?
The AppScooter, on the other hand, was designed with it in mind.
So the AppScooter got a 7 inch non
touchscreen because they thought the idea of distractions using your smartphones and all of that was a genuine problem and that avoiding that problem would give them a big jump in the safety of this scooter, so what you get are toggle switches on the right switch gear and that's how you operate this screen and I don't see that chasm.
Now that the screen runs Google Android, integrations with iOS and Android are easier and more powerful, and the AppScooter in the Netherlands promised the ability to see call notifications, SMS notifications, control your music, and the AppScooter even has built
in speakers so you can listen to music while riding the scooter.
The speakers can, of course, be utilized to produce a noise so that pedestrians are aware that a silent electric car is approaching.
What can we expect from the Ola scooter in India based on what we know about the Etergo AppScooter?
To me, all of the connectivity elements should be included as
is; there's no reason to change them.
The 6 kilowatt motor makes sense to me.
I'll be even happier if they give me a more powerful one.
What I'd really want to see is the concept of having a battery pack in the scooter and being able to add two additional battery packs as I use it.
That's a fantastic idea, in my opinion.
In terms of living with the scooter, it looks amazing, the design is very lovely indeed, and the under
seat storage is going to be a game changer since it appears like it will be a pretty huge place.
To summarize, this is an excellent set of features to have.
And I believe that if Ola can bring it together and not stray too far from the AppScooter's promise, they will be successful.
What we know about it today is that bookings are open at olaelectric.com for 499 rupees, and the rumour is that Ola is working very hard to keep the price of this scooter under a lakh rupees, which means it will be one of the more affordable, premium electric scooters in the country, which excites me tremendously.
So, how will it feel to ride an Ola electric scooter?
So, stay tuned to PowerDrift for more information on that.
This is a good time to hit both the subscribe and bell notification icons at the bottom of the page, because I promise you, this is a story you don't want to miss out on.
at August 16, 2021
Email ThisBlogThis!Share to TwitterShare to FacebookShare to Pinterest
Labels: Ola Electric Scooter, ola electric scooter price, ola electric scooter price in india, ola electric scooter release date, ola electric scooter specifications, ola scooter.
Location: Mumbai, Maharashtra, India